“God Forever, The Beatles Never” – When Lennon Compared the Beatles to Jesus in 1966
By Rob Baker 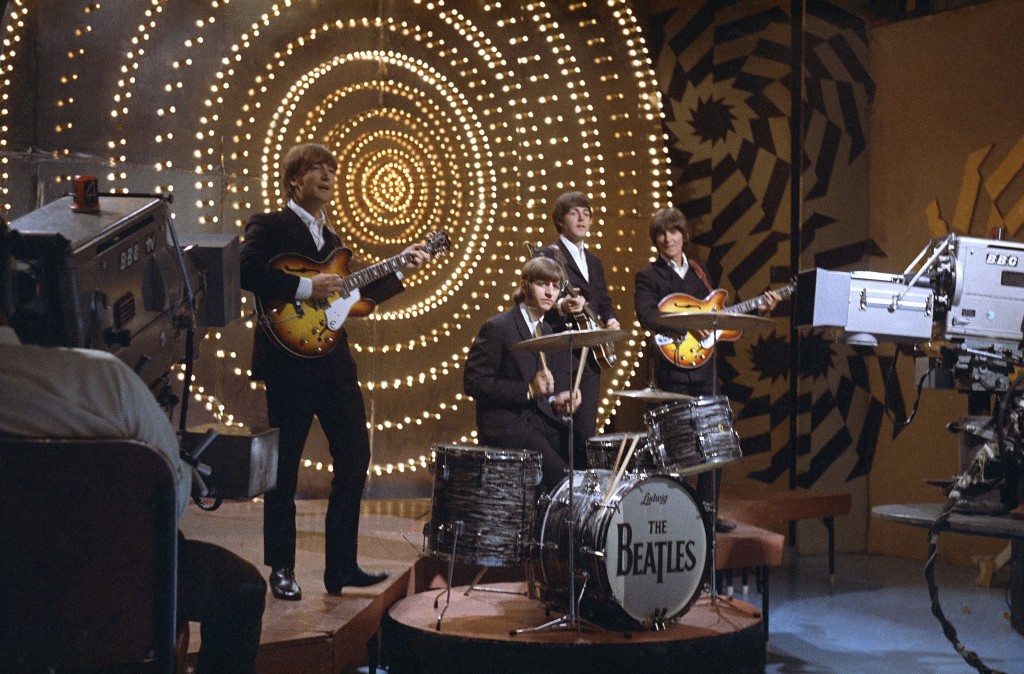 The Beatles perform on Top of the Pops, 16th June, 1966.
A far as the number of records were concerned, athough certainly not artistically, 1966 was the Beatles’ least productive year as a recording band. Although they did manage to record their influential album Revolver that year releasing it on 5 August in the UK and three days later in the United States.
On March 4 that year, and almost exactly a month before they started recording that seventh studio album on the 6 April, a series of pieces by Maureen Cleave, who knew the Beatles well, appeared in London’s Evening Standard. Under the banner How Does a Beatle Live? It is the John Lennon article that is still remembered today.
Three of the four Beatles were now all married and cocooned in Weybridge – essentially only socialising with themselves at each others houses. Cleave wrote, “They are famous in the way the Queen is famous.” She went on to describe Lennon:
He is much the same as he was before. He still peers down his nose, arrogant as an eagle, although contact lenses have righted the short sight that originally caused the expression. He looks more like Henry VIII than ever now that his face has filled out – he is just as imperious, just as unpredictable, indolent, disorganised, childish, vague, charming and quick-witted. He is still easy-going, still tough as hell.
Lennon may have been ‘tough as hell’ but the weight of fame on his shoulders was becoming harder and harder to deal with. In the same interview Lennon couldn’t help himself bringing the Beatles into a discussion about religion:
Christianity will go,” said Lennon. “It will vanish and shrink. I needn’t argue about that. I’m right and I’ll be proved right. We’re more popular than Jesus now. I don’t know which will go first, rock ’n’ roll or Christianity.
At the time the quote was hardly noticed in Britain, if at all. 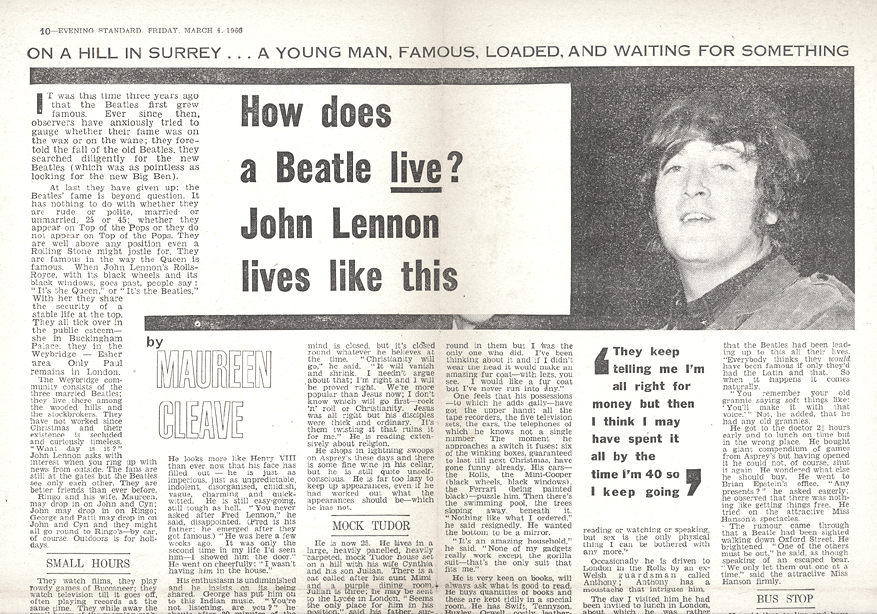 The Maureen Cleave Evening Standard article about John Lennon that appeared in March 1966.
On 16th June 1966, the recording of Revolver now completed, the Beatles appeared ‘live’ on Top of the Pops for the first and last time. They performed Paperback Writer and its b-side Rain. They arrived at the BBC Television Centre at 2.30pm for a rehearsal for the camera, they then posed for publicity photographs and conducted press interviews. More rehearsals took place between 4.15pm and 5.30, and then from 6.30pm to 7pm. 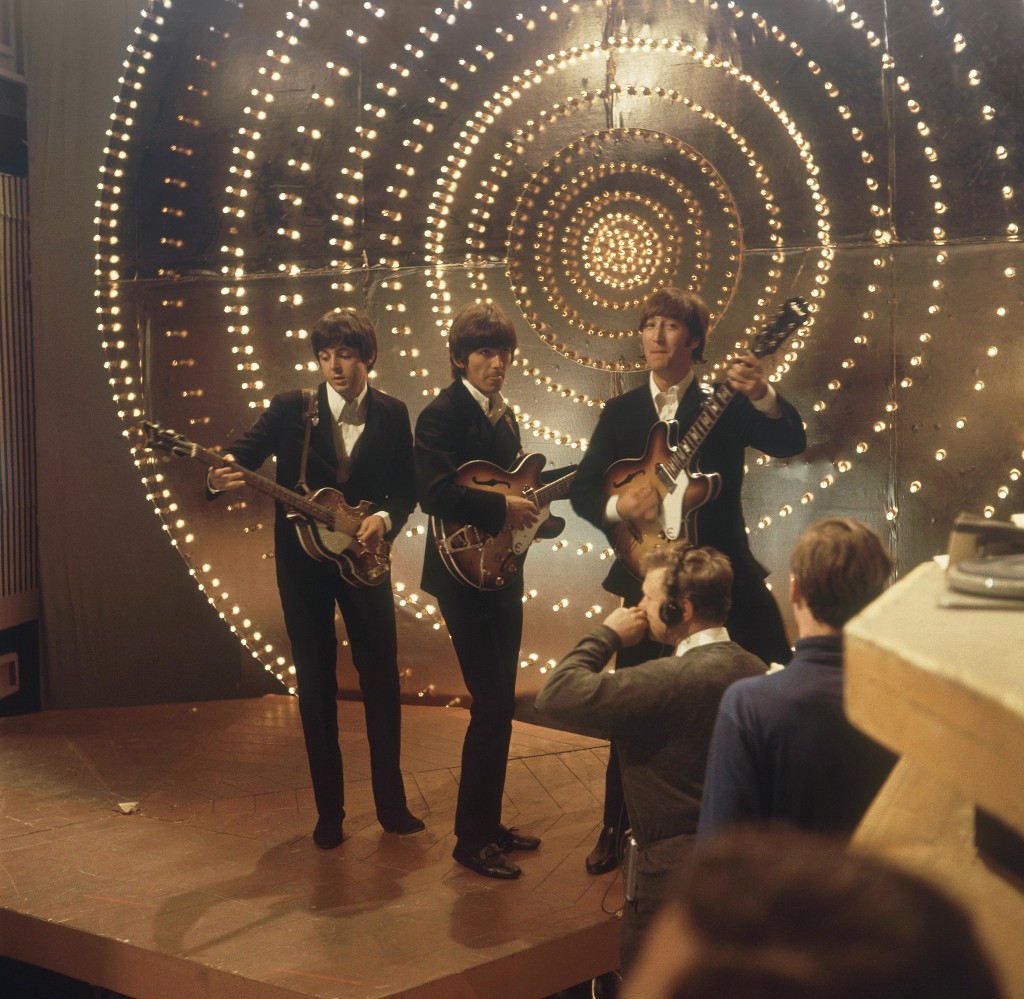 The Beatles perform at TV studios in London, June 1966, prior to their tour in Germany and Japan. From left to right: Paul McCartney, George Harrison and John Lennon. (AP Photo) 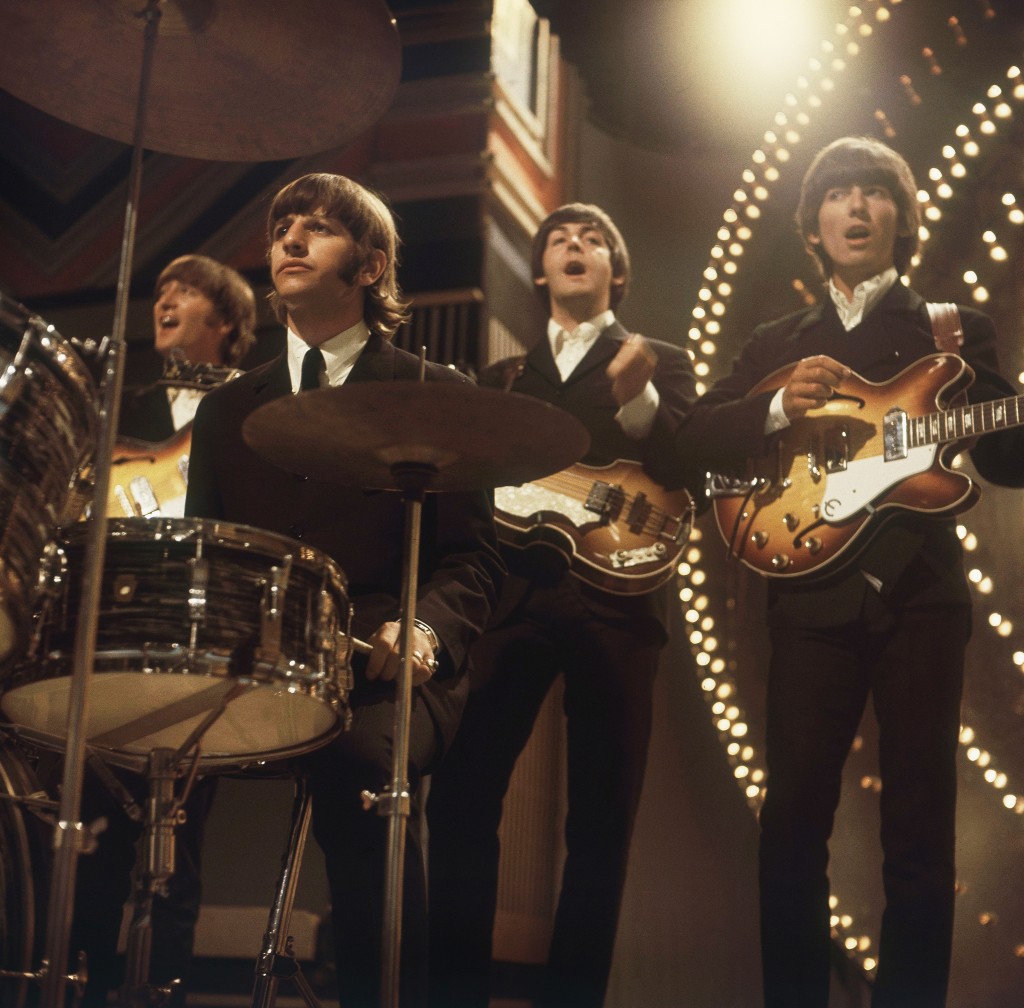 The live broadcast took place between 7.30pm and 8pm on BBC One. Introduced by the host Pete Murray the Beatles were the final act to appear and they mimed to both Paperback Writer and its b-side, Rain. Unfortunately the BBC, in their wisdom, wiped the tape containing the priceless Beatles’ performance in the 1970s.
After touring Japan and the Philippines and then Europe the Beatles staged their third and final tour of America in August 1966. It consisted of fourteen shows with one in Toronto in Canada. Just before the tour began the August issue of the US teenage magazine Datebook included the quote about (The Beatles) being more popular than Jesus. All hell broke loose. It may have been, initially, rather a contrived hell, but it still broke loose nonetheless. Soon radio station WAQY in Birmingham, Alabama announced it was banning Beatles music and would hold a bonfire to burn Beatles records. Dozens of other radio stations followed suit and several stations also held bonfires. Attempting to make light of the incident, Harrison said, “They’ve got to buy them before they can burn them.” 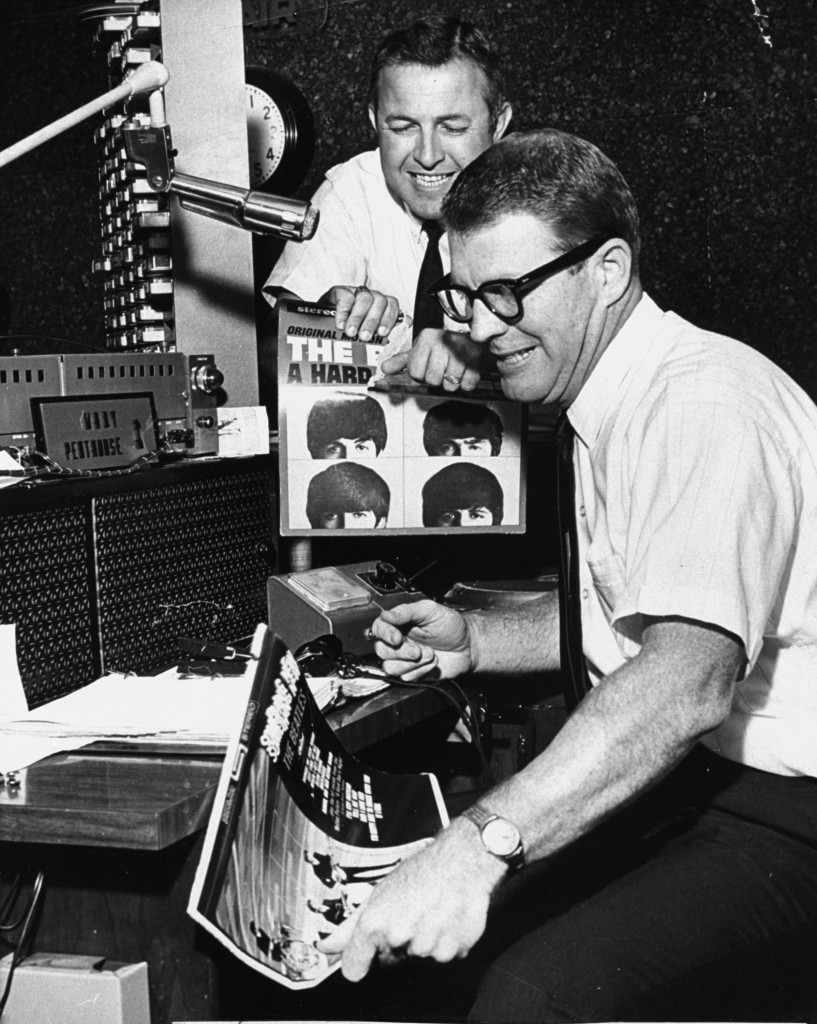 Birmingham disc jockeys Tommy Charles, left, and Doug Layton of Radio Station WAQY rip and break materials representing the British singing group the “Beatles” on August 8, 1966. The broadcasters started a “Ban the Beatles” campaign after Beatle John Lennon was quoted as saying his group is more popular than Jesus. Charles took exception to the statement as “absurd and sacrilegious.” (AP Photo) 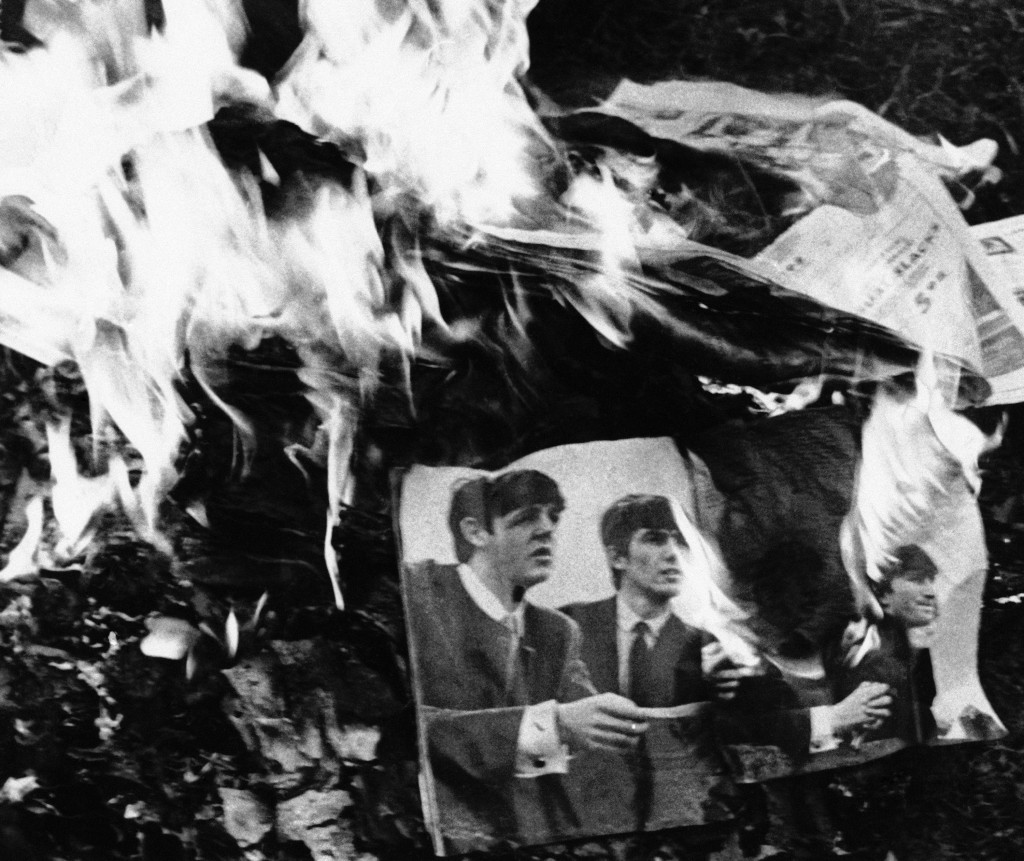 The Beatles went up in smoke near Fort Oglethorpe, Ga., on August 12, 1966 as neighborhood youngsters severed once and for all their twoyear friendship with the four world figures. The Beatlemania bonfire, planned by Chuck Smith, 13, was in protest against John Lennon remark to the effect that the Beatles are more popular than Jesus. (AP Photo)

The Beatles appear to have lost their popularity at Beaver Meadows, a small community in northeastern Pennsylvania according to the sign, God Forever, Beatles Never, posted along Route 93, near Hazleton on August 10, 1966. A proposal in the Pa. legislature asks the ban of any future appearance of the Beatles in this state because of a remark attributed to one of the Beatles that they are more popular than Jesus Christ. (AP Photo) 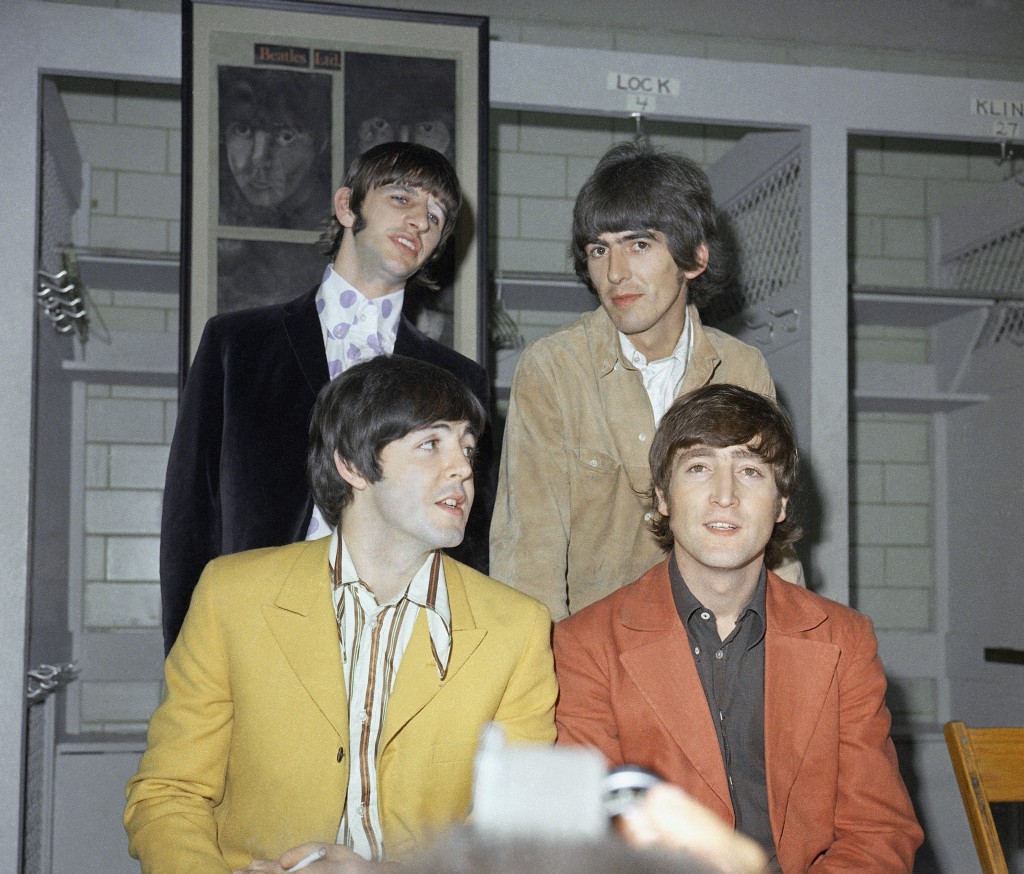 The British rock group the Beatles is shown during their U.S. tour in Washington, D.C., Aug. 13, 1966. Standing, left to right are Ringo Starr and George Harrison, and seated are Paul McCartney and John Lennon. (AP Photo) 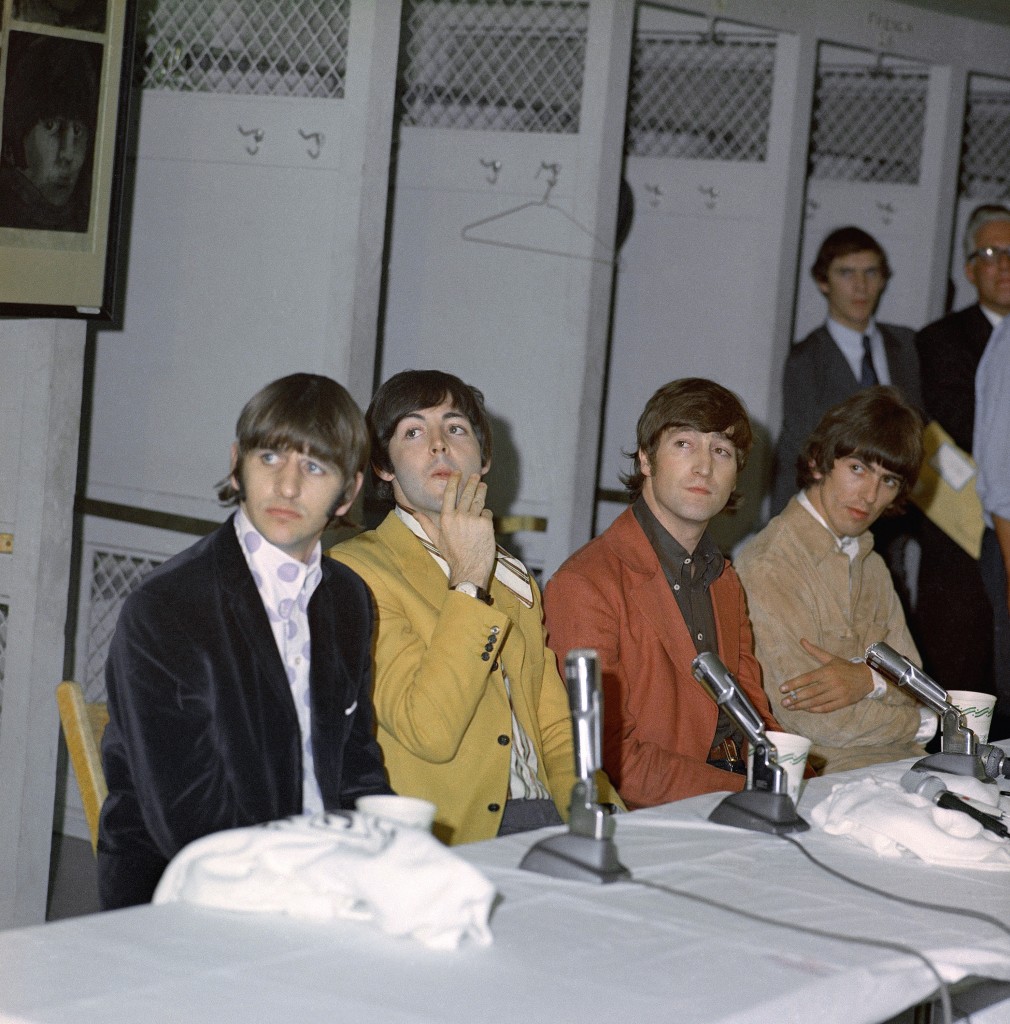 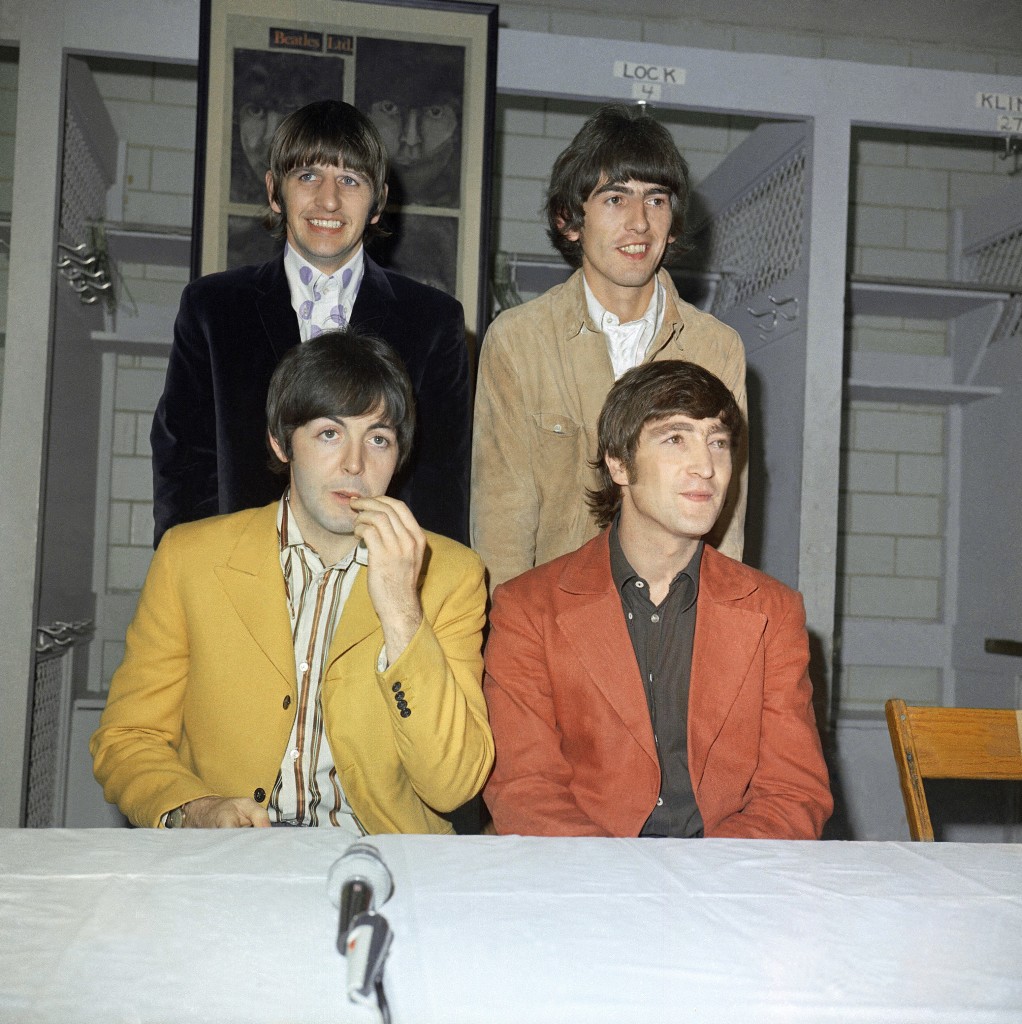 Brian Epstein held a press conference at the Sheraton Hotel in New York on 6 August 1966 and read out a statement:
John is deeply concerned and regrets that people with certain religious beliefs should have been offended in any way whatsoever.
At a separate press conference in Chicago a few days later Lennon tried to explain his comment:
I’m not anti-Christ or anti-religion or anti-God. I’m not saying we’re better or greater, or comparing us with Jesus Christ as a person, or God as a thing or whatever it is. I just said what I said and was wrong, or was taken wrong, and now it’s all this.
More than a decade later Lennon said he was glad of the furore he had caused: He wrote:
My life with the Beatles had become a trap. I always remember to thank Jesus for the end of my touring days; if I hadn’t said that the Beatles were ‘bigger than Jesus’ and upset the very Christian Ku Klux Klan, well, Lord, I might still be up there with all the other performing fleas! God bless America. Thank you, Jesus.
In 2008 the Vatican seemed to have pardoned Lennon for his comments he had made 42 years before, when the Holy See’s newspaper L’Osservatore Romano dismissed his comments as, “showing off, bragging by a young English working-class musician who had grown up in the age of Elvis Presley and rock and roll and had enjoyed unexpected success.”
I wonder what would happen today if Harry Styles, say, claimed One Direction were more popular than Jesus, or perhaps Mohammad? 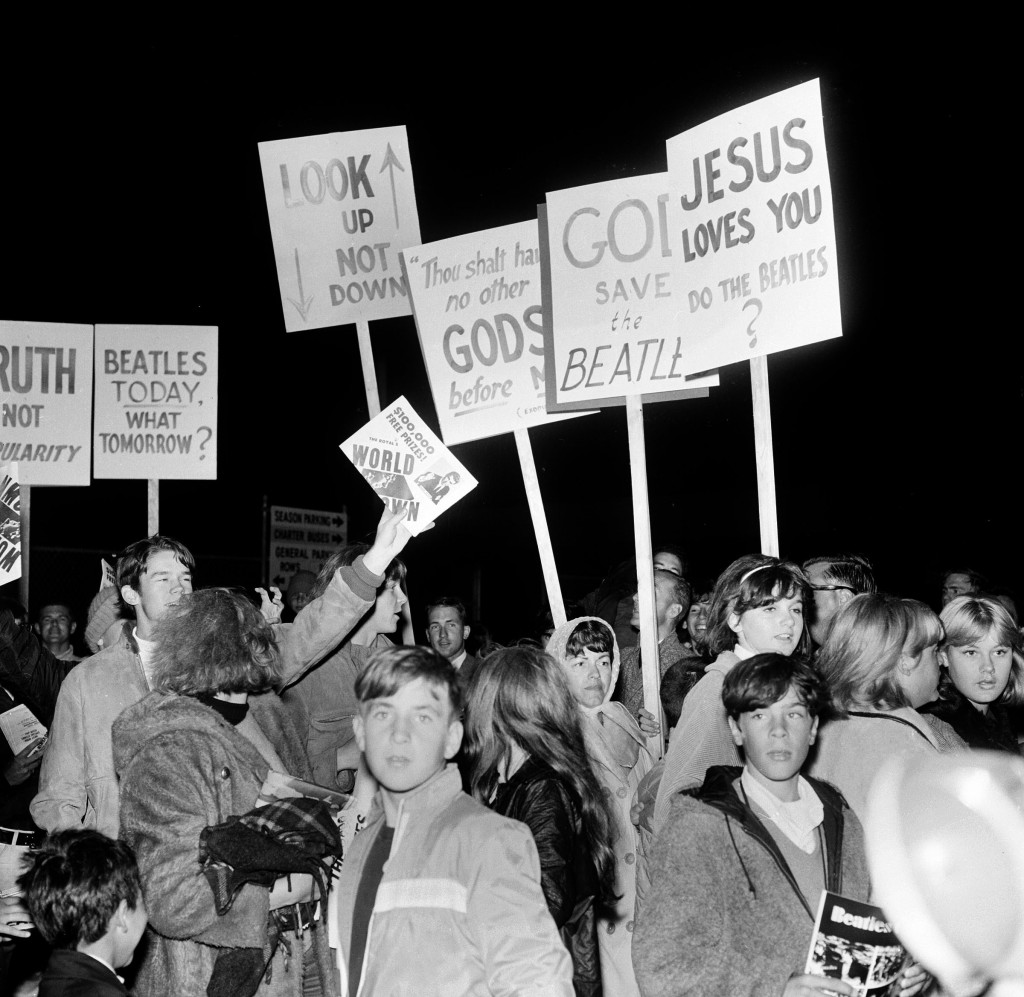 Young churchfolk from nearby Sunnyvale on the San Francisco Peninsula protest against the Beatles and John Lennon’s remark that the Beatles are more popular than Jesus.
source
Tags: music, the beatles, uk
Subscribe