'It isn't necessary to believe everything is true, only what is necessary'

'It isn't necessary to believe everything is true, only what is necessary' (Kafka) 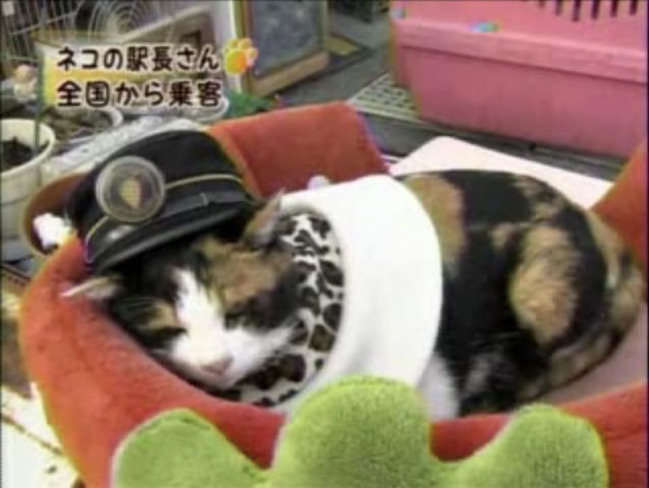 The highest-ranking female at the Wakayama Electric Railway Co. does nothing more than sit around looking cute, but no one minds because she’s single-handedly caused ridership on the struggling transit system to jump more than 10 percent.

The miracle worker that’s turned the Japanese railway around is a nine-year-old cat. Her name is Tama, she wears a stationmaster cap and she has her own office. And she’s responsible for one of the the greatest business turnarounds since Steve Jobs saved Apple.

"She never complains, even though passengers touch her all over the place," company spokesman Yoshiko Yamaki told the Associated Press. "She is an amazing cat. She has patience and charisma. She is the perfect stationmaster."

Before Tama came along, Wakamaya was losing 500 million yen ($4.7 million US) a year as passengers abandoned the Kishigawa line in western Japan. In an effort to staunch the red ink, railway officials all but shut down Kishigawa station.

But Tama stuck around, and the passengers returned.

It didn’t happen overnight. Railway officials laid off the station’s staff in April 2006, but Tama — whose mother was a stray that lived at the station — didn’t leave. She became a popular fixture among riders, and railway officials formally named her "stationmaster" in January 2007.

Cats are considered good luck in Japan, and Tama’s promotion made her a national sensation. Tourists flocked to the station to take pictures and buy souvenirs — postcards, erasers, notebooks and pins. Ridership rose 17 percent in the month after her appointment, and rose another 10 percent the following year.

Thrilled by her performance, the railway promoted Tama to "super-stationmaster" in January, and she is "the only female in a managerial position."

"She now holds the fifth-highest position in the company," Yamaki told AFP. Tama got her own office — a renovated ticket booth — in April during a ceremony that the president of the railway and the mayor of Kinokawa attended. A local grocer looks after Tama, who’s salary is paid in cat food, and she works from nine to five with Sundays off.