Speaking in Other Voices: An Ethnography of Walloon Puppet Theaters

The day I was born Charlemagne entered my life.
Well… not the real Charlemagne but the statue that stands on the Boulevard d’Avroy.
As my father sped past it to get to the hospital, he noticed the emperor on his horse.

Later on, as a young woman attending school at the Lycée Léonie de Waha, I walked past Charlemagne every day on my way to pick up the bus.
In October, the whole atmosphere changes as caroussels and rides of all sorst invade the boulevards and surround Charlemagne with noise and activity. Smells of Brussels waffles, roasted chestnuts, French fries (which should really be called Belgian fries, but that's another story) fill the air for a whole month.
The beautiful bronze statue reminds everyone that Liège claims Charlemagne as one of her own.
Yes, Charlemagne is also a Liègeois (born in Herstal) and the symbol of the unification of the Franks into a more defined Western European entity.
Ok, so you know Charlemagne, but what of Tchantchès? Who is he? And how does he fit in Charlemagne’s life?
Tchantchès is the epitomy of what being Liègeois is all about.
According to the legend, Tchantchès was born in Liège, miraculously, on August 25th, 760, between two cobble stones in Outre-Meuse.
The good folks who found him marvelled at hearing him sing, so soon after birth.
He was a chubby baby, always smiling, except he didn’t like water and so his adoptive father took to giving him a cookie dunked in some pèkèt then weaned him with salted herring which caused him to be forever thirsty.
Tchantchès had many troubles in his life, the least of which was not being endowed with a nose worthy of Cyrano. This caused him so much ridicule he hesitated to leave the house but the evening of August 14th, 770, he volunteered as Saint-Måcrawe, and covered in soot, was hoisted on a chair and paraded in triumph across the neighborhood. This taught him that ugliness, when mixed with wit and kindness, can be loved. From that day forward he was crowned "Prince di Dju d'là Mouse" (Prince of Outre-Meuse).
One day while walking along the Meuse River, he met Bishop Turpin and Roland, Charlemagne’s nephew. Turpin was chastising Roland over his poor grades in Latin. Tchantchès, who was ever the impertinent, interrupted their conversation and in an attempt to appease both master and student, he made this profound statement : "Yes, Lord Knight Roland, Latin serves no purpose, but it is still very useful".
This earned him an introduction before Charlemagne, and the chance to become Roland’s companion. There followed the grand expedition to Spain. History o full of interesting anecdotes showing the great familiarity Tchantchès enjoyed with Charlemagne. Tchantchès never left Charlemagne or Roland’s sides: he was ever present in private councils and on the battlefield, helping them with his good advice or his phenomenal head butts, as Tchantchès was the champion of the « soukeus de Dju d'la ».
This is how Tchantchès fought: without lance, without pick, without sword, a red handkerchief around the neck as his banner, his blue apron as his shield, his black hat as a helmet upon his hard-as-rock skull. He spits in his hands, grabs the adversary by the shoulders and wham! Right in the sternum, smacks him with his head, breaks his ribs and sends him to a better place. No armor, however strong it can be, can resist this great ram; any man hit by Tchantchès is a dead man, while he remains untouchable thanks to his blessed nose.
During the Battle of Roncevaux, Roland was overconfident and told the yawning Tchantchès to go take a nap after he had already broken the ribs of 3,000 Sarrazins. That was a big mistake. What pain our hero felt when he saw Charlemagne holding Roland’s body!
After avenging his friend’s death, Tchantchès took leave of the Emperor and returned to Liège and never forgave himself for falling asleep during the last part of the Battle of Roncevaux. He died of the Spanish flu and was buried at the very spot where a monument in his name was erected on the place de l’Yser.
Nothing could defeat him, not love, not even old age (he was 40y old when he died) Missed by everyone, he has remained the prototype of the true Liégeois: hard headed, insubordinate spirit, loud mouth, enemy of grandeur and ceremony, violently independent, but a heart of gold, prompt to engage in all noble causes.
As you can imagine this life, mixed with History, can produce quite a number of good stories.

When I was little my father took me to see a Puppet show recounting such heroic tales. of Roalnd and Charlemagne. I am not sure whether it was already called the Musée Tchantchès but the marionnettes are the same (or at least exact replicas) as those used there today.
I vaguely recall that time yet the impression has lasted to this day.
The marionnettes stood a good 3 feet high, adorned with beautiful period costumes.
It was like stepping back in the days of Guignol, when puppets were used to amuse the public, not just children.
Today the plays seem to have less appeal so the troop has increased their repertoire to include a variety of plays.

Tchantchès is my hero… I love his good naturedness and his tenacity, his loyalty and his humanity. If he is the symbol of the spirit of the “Ardent City” that is Liège, then it shows its vibrancy and its life.

It’s the end of October and kids in the US and many other places are going to celebrate halloween… In Liège, the annual October Fair crowding the long boulevards in front of my Lycée, will close soon and Charlemagne will find peace once more, on top of his steed. Another year…
http://www.tchantches.be/archives.htm

Liège provides a feast for the senses

Famous for its pearl-sugar waffles and savoury delights, the lively city of Liège has a cultural buzz and appealing community atmosphere 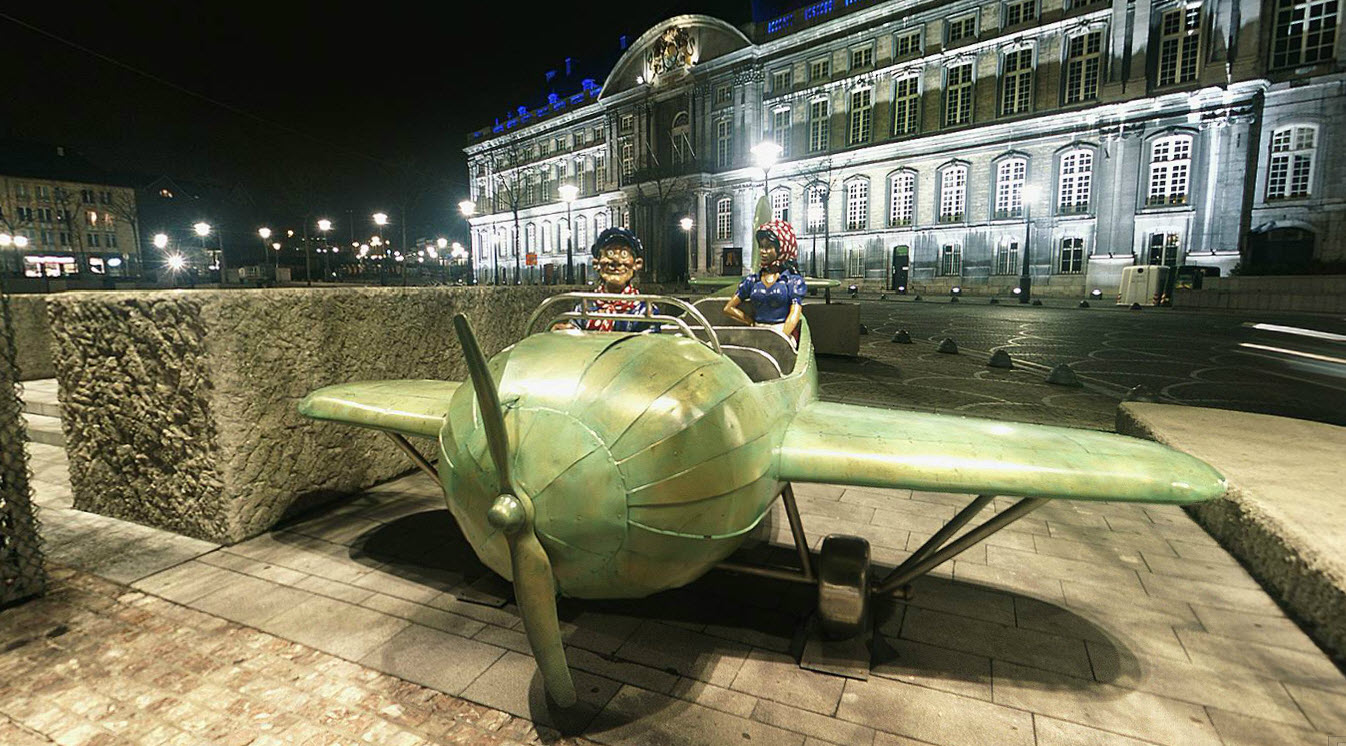 
"Place Saint-Lambert" constitutes the historical heart of the city of Liège. Until the beginning of the 19th century, it was occupied by several cathedrals successively destroyed and rebuilt. The latest was burned out in 1789 and cleared out in 1821.
In the 20th century the square became a crossing point for cars; so in the 60ies and 70ies numerous projects developed in order to transform it into big crossroads, sometimes underground, sometimes above the earth surface... During 30 years, the 'Place St-Lambert' works generated controversies and projects changes. The city was deprived of its heart for a long time.
The current geometry of the square reminds St-Lambert Cathedral that still rose up at the end of the 18th century. The high columns show the location of the outer pillars of the former building.

The small plane
There has been a dozen small planes on the former Place St-Lambert. The first one landed on the square in 1927, the year when Charles Lindbergh crossed the Atlantic. Models of more or less realistic painted steel sheets, they were put up by photographers to attract passers-by (above all children) who wanted to keep a souvenir of Liège. The last one disappeared in 1963. Since 1996, Place St-Lambert houses a bigger and more solid small plane. 'Tchantchès et Nanesse', characters of the Liège's folklore have already taken their seat and are waiting for you for an unexpected souvenir... an already well-established tradition in Liège!
The "Palais des Prince-Evêques" Behind the small plane, one can see the Palace of the Prince-Bishops of Liège. Nowadays, it houses the Provincial Palace and the Court of Justice where about 350 lawyers meet every day.